A 33-year-old lady presented complaining of an intermittently irregular right pupil. The pupil distortion usually lasted for a few minutes and, despite being painless, was often accompanied by a vague change in periocular sensation. 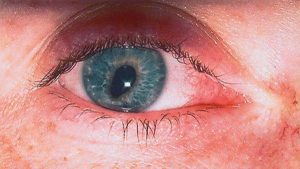 The symptom occurred sporadically, sometimes with several weeks in between episodes, but occasionally happening several times on the same day. There were no other visual symptoms and no significant past ocular history. General health was good and no regular medications were taken.

visual acuity was normal bilaterally. There was a 1 mm right ptosis with mild anisocoria, the right pupil being 1 mm smaller in normal room illumination. In dim lighting, the discrepancy in pupillary size increased to 3 mm. Pupil reactions to light and accommodation were considered normal. No other ocular or neurological abnormalities were detected.

Phenylephrine 10% in both eyes appeared to improve the ptosis and caused more dilatation to the right pupil (7 mm compared to 4 mm on the left). A provisional diagnosis of a variant of right Horner’s syndrome was made.

A chest X-ray and magnetic resonance imaging of the brain and orbits were both normal. Some weeks later, the patient captured a picture of the pupillary distortion showing a tadpole-shaped pupil.

Tadpole pupil (also referred to as tadpole-shaped pupil) is a rare condition originally described by Thompson et al. in a series of patients who experienced brief, intermittent episodes of pupil dilation. The hallmark feature is that one segment of the iris is pulled to a peak, creating an irregular-shaped pupil, resembling the shape of a tadpole. 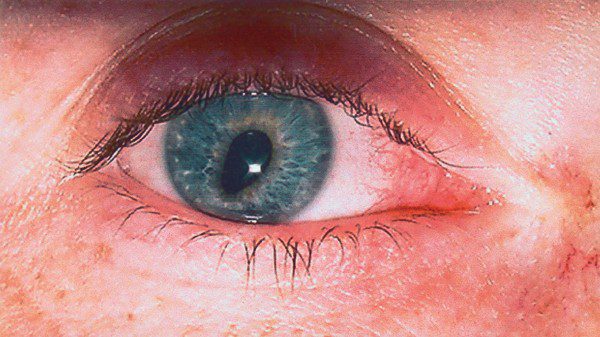 capture similar photos by your smartphone !!

Tadpole pupil pathophysiologic mechanism is unknown. A few hypotheses have been reported, but none have been proven. One hypothesis is a segmental spasm of the iris dilator muscle (not the iris sphincter muscle) occurs. This is based on observations that pupillary light response remains intact.

several cases of tadpole pupils have been reported without an identifiable trigger, physical exercise and waking up from sleep have been reported, leading to the hypothesis that an increase of circulating catecholamines may play a role.

the association of tadpole pupil and Horner Syndrome allows for speculation that denervation hypersensitivity plays a role.

There are no known risk factors for tadpole pupils. Episodes of tadpole pupils have been associated with migraine headache, menstruation, awakening from sleep, and exercise.

Tadpole pupil is a clinical diagnosis based on history and the hallmark of episodic pupillary sphincter dilation. As mentioned above, the episodes are typically brief and are more often unilateral, but can be bilateral and can rarely occur simultaneously.

Dilute pilocarpine testing can be used in the office to rule out Adie’s pupil. An exaggerated constriction post-pilocarpine would make the diagnosis of Adie’s, not tadpole pupil. On the contrary, the absence of the phenomenon along with the features listed above would support a diagnosis of the tadpole pupil.

It is also important to obtain a thorough medical history and review of symptoms in order to detect any central, second-order neuron, or third-order neuron lesion. When appropriate, imaging of the brain and/or thorax should be obtained.

The pupil will appear oval-shaped and tapered at the end most near the limbus. The tapered end can appear in any clock direction of the eye. 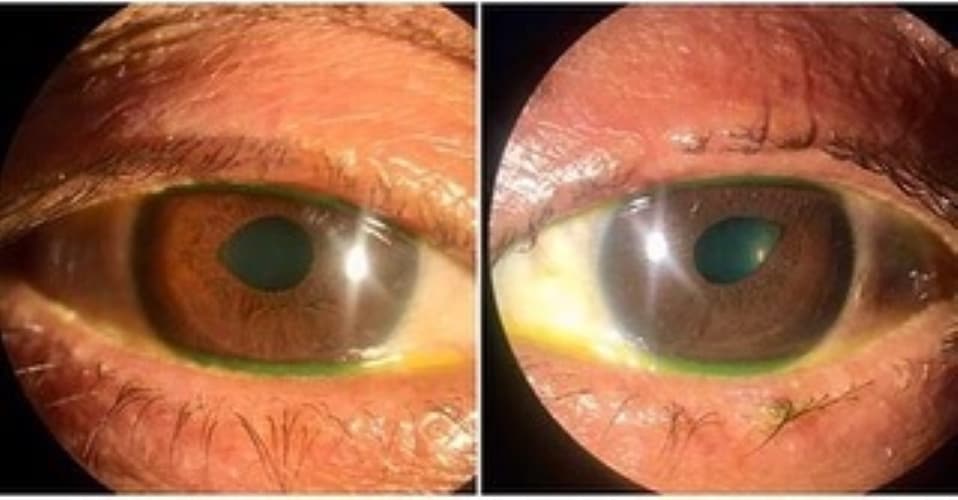 Episodes of pupils are typically brief. In the series by Thompson et al, episodes lasted less than five minutes in 23 of 26 patients (88%) and less than 2 minutes in 18 of 26 patients (69%). Episodes often occurred throughout the day and lasted for days to weeks. Most cases resolved spontaneously, while some patients had occasional relapses.

Eighteen of the 26 patients (69%) in Thompson’s series involved the same eye, while the other 8 patients (31%) had symptoms alternating between both eyes. Two patients in this series experienced pupillary changes of both eyes occurring simultaneously. Bilateral involvement was also reported by Hansen and Vijayaraghavan.

Episodes of tadpole pupil are rarely witnessed by the physician. With the modern use of cameras and camera phones, more of these episodes are being documented and reported to ophthalmologists with photographs or videos.

The clinician must pay careful attention to visual acuity, pupils (both in dark and light), assessing for uniform constriction and dilation, and assessing for any vermiform movements of the iris.

When episodes of tadpole pupil were observed by the clinician, there was poor constriction to light at the segment of dilated iris, but the remainder of the pupil constricted normally, suggesting abnormal activity of the iris dilator as opposed to iris sphincter.

Iris color should be evaluated assessing for any signs of heterochromia (i.e. Congenital Horner’s), iris atrophy (i.e. trauma), or transillumination defects. Eyelid symmetry and extraocular movements should be assessed. Color plates, confrontational visual fields, and testing of stereopsis should be performed. The dilated exam should pay careful attention to the optic nerves.

The following symptoms have been reported

Because of the paucity of reported cases, no randomized studies have been performed on potential treatment options. Most reported cases resolved spontaneously.

Tadpole pupil requires no medical or surgical management. There are no known complications. If an associated Horner syndrome has been ruled out, patients can be reassured that episodes of tadpole pupil while bothersome to some patients will not have any long-term adverse effects on vision.

Long-term follow-up with these patients has not been reported in the literature. Patients usually have long-term resolution with occasional relapses. It has yet to be reported at what time interval patients begin to experience resolution of symptoms.

How to take slit-lamp exam images by a smartphone?

Smartphone slit-lamp photography is the new advancement in the field of science and technology in which the photographs of the desired slit-lamp finding can be taken with smartphones by using the slit-lamp adapters.