A 60 years old female presented for a routine eye check-up. Her best-corrected visual acuity was 6/6 in both eyes. Slit-lamp examination after pupillary dilatation displayed vivid multi-colored glistening opacities in the otherwise clear lens of her left eye (Fig. 1A).

A magnified view using direct focal illumination revealed a spectacular array of polychromatic needle-shaped crystals traversing all directions and cutting across the natural limits of the lens fibers, located in the deep cortex and anterior nucleus of the lens, giving the appearance of colored lights decorating the branches as on a Christmas tree (Fig. 1B).

The colors of the crystals varied according to the angle of the incident light. In retro illumination, only a dim outline of the cataract was seen. The right eye examination was unremarkable. The patient had no other notable ocular or systemic abnormality.

(A) Glistening opacities visible in the lens of the left eye on diffuse illumination. (B) A magnified view using direct focal illumination showed multiple polychromatic needle-shaped crystals traversing all directions, cutting across the natural limits of the lens fibers.

Christmas tree cataract also called a starry cataract, is a rare type of opacity in the crystalline characterized by polychromatic needle-shaped deposits in the deep cortex and nucleus thereof which may be isolated or associated with other opacities. It is presented unilaterally or asymmetrically bilaterally.

There are controversies regarding the composition of said opacities. Hayes and Fisher state that the images formed are the result of light diffraction when reflected in the cells of the crystalline.

Pau and Förster suggest that the composition of the opacities would mostly be cholesterol. Shun-Shin et al.suggested cystine as the substance related to the formation of the Christmas tree opacities typical of cataract.

Cataracts in the Christmas tree are a rare form of opacity in the crystalline in which images similar to highly refringent multicolored needles can be seen crossing the fibers in the deep layers of the cortex.

This type of change has already been the subject of several clinical discussions, and the composition of said opacities is still controversial.

The colors vary according to the angle of incident light and the colors red and green are predominant, which explains its nomenclature since the brightness and variety of colors refer to the ornaments that commonly decorate the Christmas tree.

There are case reports of the association between cataracts in the Christmas tree and myotonic dystrophy, also called Steinert’s disease, which is characterized by a delay in muscle relaxation after a volunteer effort (myotomy). 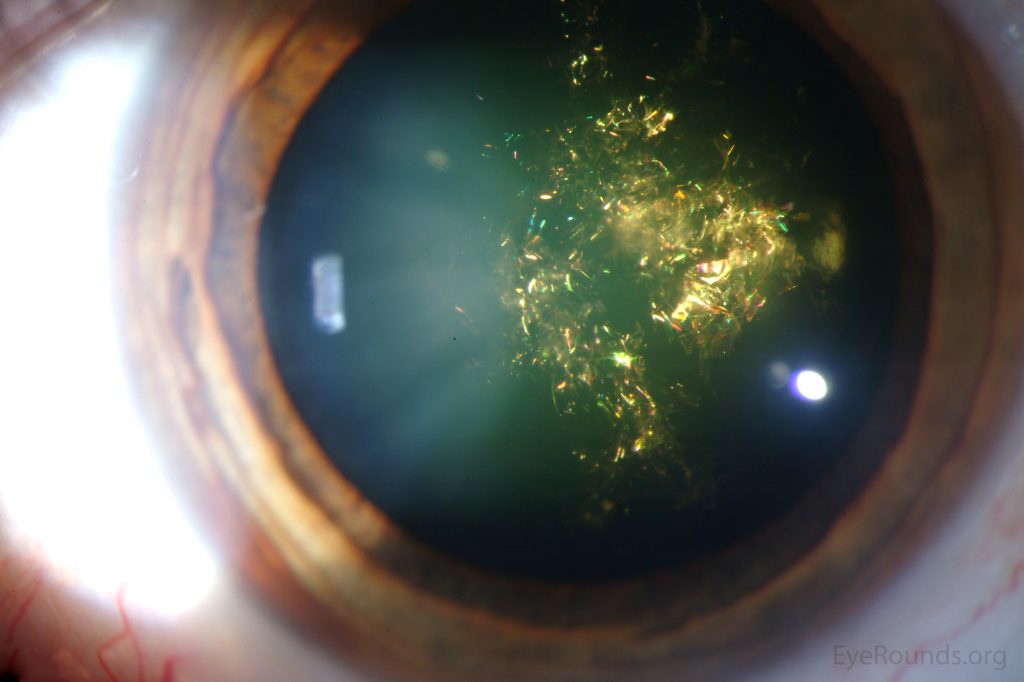 Typically there are no associated pathologies to Christmas tree cataracts and most patients who have it are fit and well. However, it is frequently observed in people who suffer from Steinert’s disease which is a type of myotonic dystrophy. In either case, the opacity offers no threat to visual acuity.

They may develop a little over time but surgery is avoided where possible as the reflective properties of the opacity impair the view of the surgeon when performing the procedure.

How to take slitlamp exam images by a smartphone ?

Smartphone slit-lamp photography is the new advancement in the field of science and technology in which the photographs of the desired slit-lamp finding can be taken with smartphones by using the slit-lamp adapters.